The Altair 8800 is one of my favorite computers of all time.

It's the microcomputer that started it all. It was the first commercially available microcomputer, and ironically, was the most full-featured, when fully equipped. By "fully equipped," I mean having lots of memory, a terminal, a printer, a floppy disk drive and maybe even a hard disk drive. All of these peripheral options were available. But to have them all, you would have spent as much as it costed to buy a minicomputer.

By the way - for the youngsters - a "minicomputer" is not the same thing as a microcomputer. A minicomputer is something most people now-days (and really most people back then too) would call a mainframe. Most minicomputers required dedicated computers rooms with strict temperature and humidity control. The processor was inside one to several six-foot tall, 19-inch wide racks, and they had disk drives as large as washing machines. They shook like a washing machine too, when being accessed. And they had those cool-looking tape drives, with reels spinning back and forth to seek and retrieve data in the middle of the tape and then return to the beginning of the tape, ready for the next access. 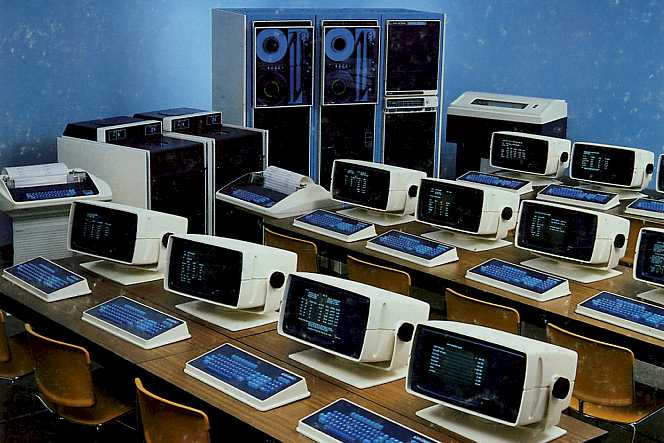 In the mid-1970s, there was a handful of retail outlets that had microcomputers. Microcomputers used microprocessor chips - the central brain of the computer - and were physically smaller than minicomputers. Most microcomputers were still only available through mail-order outlets, and many micro enthusiasts would build from kits or from scratch. But there were a few retail stores that had microcomputers on display. I can remember a retailer called Team Electronics that had an Apple on display. It was always running the "Star Trek" program, which I thought was cool. By the late-1970s, you could find TRS-80 computers in Radio Shack stores. But the ivory tower for me was the Altair Computer Center - in the Annex Mall in Tulsa - which had Altair and IMSAI computers, along with a good selection of peripherals.

The Altair 8800 was a microcomputer because it had a microprocessor for its central processing unit. But it really was very much like a minicomputer in appearance and capability. So it's not surprising that this 1975 issue of Popular Electronics described it as the "World's First Minicomputer Kit." Bill Gates saw this article and raced to MITS to sell 'em a BASIC interpreter, and that's how Microsoft got its start. This is literally the computer that gave Microsoft its first sale.

What seduced me the most about the Altair was its front-panel. That, combined with its full-featured peripherals and its ability to run applications, made it seem like a "real" computer to me. An Apple II could run Star Trek, but an Altair could run Star Trek and accounting software.

By the early 1980s - but prior to the IBM PC introduction of the PC - the Apple II was gaining popularity because of the large number of programs available for it. And it was less expensive than a comparably-equipped Altair 8800 with memory, disk and printer. So by 1980, the sun was setting on the Altair but in the 1970s, it was the most full-featured microcomputer you could buy.

What I didn't realize in the 1970s was the front-panel I lusted after so much was actually a feature borrowed from minicomputers. I just thought that front-panel was cool looking and super high-tech. But it's a feature that future microcomputers would shed, and then later the minis would follow. I didn't realize this until the 1980s, when I started working as an engineer for Data General, a minicomputer manufacturer. Their Nova and Eclipse lines of minicomputers had front-panels with switches and lights for rudimentary data entry.

It's a very useful feature, actually, which allowed the user to control the computer at a very low-level without needing any external peripherals. The operator could start, stop, step one instruction at a time, examine individual memory locations or select a peripheral device to load memory from.

Microcomputer manufacturers stopped doing this, opting instead for built-in programming which expected startup commands from the keyboard. It also allowed the computers to be built more cheaply, because they didn't need a couple dozen switches and lights. Naturally, minicomputer manufacturers began to do this too, and dropped their front-panels in favor of what they called a "soft console." You typed commands on the primary terminal - often called the master console - right after power-up.

But since the Altair 8800 was the first commercially available microcomputer system, it's natural that it mimicked features of the minicomputers of the time. MITS, the manufacturer of the Altair 8800, had purchased a Data General Nova 2 and this is what they patterned their machine upon. But it wasn't just the look-and-feel, and not just the front-panel user-interface. They even used octal to describe the 8080 instruction set in their operator's manual to make it more like a minicomputer!

You will notice that PART ONE lists Number Systems, The Binary System and The Octal System but it doesn't mention Hexadecimal. Click the page to download the whole manual, if you want. It's fascinating and interesting. It's interesting because octal is inconvenient and weird to any microcomputer programmer, and frankly, it's almost unknown to a modern programmer of today. Octal was a minicomputer thing. All common microprocessors have architectures that are multiples of four bits, and most process data in groups that are eight bits or larger. That's why hexadecimal is so common now-days: It's a number system that is easily represented with a group of four bits.

Octal was common in older systems because prior to the ASCII standard, characters were often stored in memory in six-bit groups. Every manufacturer used its own encoding format, and there was no standard. Six bits is enough to encode 64 characters, so you can easily encode the whole alphabet, all the numeric digits and some other characters, like for punctuation. This was how all the old minicomputer and mainframe systems encoded data, prior to the mid to late 1960s. And because of this, several minicomputers of that era were twelve-bit machines. That architecture nicely fits two six-bit data groups.

Since they encoded data grouped in six bits, the octal system was perfect. Each octal digit was represented with three bits, so six bits formed two octal digits. That grouping was common in the 1960s and it held through the 1970s in minicomputers, even after they began to embrace the ASCII standard, with seven-bit and eight-bit variants. Minicomputers moved to 16-bit architectures, and eventually onto 32-bits, but they usually still represented machine instructions and data with octal numbers. So like I said earlier, octal was a minicomputer thing.

But by the 1970s - after 8-bit microprocessors were invented - hexadecimal nomenclature was so common I could almost nobody used any other numeric base. All microprocessor tech sheets showed machine-code instructions, data and memory addresses in binary and often in hexadecimal but not in octal. The octal lexicon was completely absent in microprocessor and microcomputer tech sheets. Except for the Altair 8800: MITS grouped the Altair's front panel switches and lights in octal, just like the Data General Nova they patterned it after.

As popular as the Altair 8800 was for its time, it's still a very rare machine. For one thing, not nearly as many people were familiar enough with computers to buy one for their home in the 1970s. Even still, MITS was a small company and couldn't deliver on the orders they received. So only a few thousand Altairs were shipped. And another thing that makes 'em rare is natural obsolescence - Even those that had an Altair 8800 stopped using them by the 1980s. Many of them fell into disrepair and some were eventually discarded. So finding one in the used market is relatively difficult.

Several kit manufacturers have spring up in the last few years that make Altair 8800 replicas and clones. There are two basic types: One type uses a modern microprocessor to emulate the Altair and a second type recreates the original with new boards using updated PCB artwork. Both use the same case - a copy of the original - and both are excellent.

Altair clones can be divided into subcategories too. One type uses an Atmel-based Arduino microcomputer, with firmware flashed into it to make it emulate the Altair. This type usually incorporates a microSD card to emulate one or more disk drives. The second type uses a PIC-based microcontroller to emulate the Altair, having both microcode and disk emulation stored onboard in flash memory.

Re-creation systems and parts are available from Mike Douglas at DeRamp.com, Grant Stockly at AltairKit.com and Jerry Walker at JMprecision.co.uk.


To make it really fun, connect using a VT-100 clone based on the boards made by Geoff Graham and Peter Hizalev.